Teen Patti – the casino card game, comes in multiple variants. Although they are not common in the online versions, traditional players would know they come in abundance. This article discusses the best-known real money Teen Patti variations every player needs to know. Let’s get started.

The dealer deals 4 cards, out of which the player needs to choose the best 3 cards.

This one is similar to lowball in Poker. Here, there is a reversal of the ranking of the cards in a way that the lowest ranking combination now has the highest rank and vice versa.

The dealer draws a random card after dealing. Afterward, this card helps to nominate all other cards of the same rank as wild. Every player’s lowest ranking card is always wild for that hand. We use this card to nominate all other cards of the same rank as wild in the same hand. The player gets two wild cards if there is a pair of the lowest cards. This is the opposite of Low Wild, where the player’s highest ranking card becomes wild. This card becomes eligible to nominate all other cards of the same rank as wild in the same hand. The player gets two wild cards if there is a pair of highest cards. The dealer deals 4 cards for each player, where the lowest two cards become virtual wilds in the respective hands. If the two cards are a pair, they become one wild. Also, the dismissal of wild cards happens if the middle-rank cards are a pair. You will draw one card at random post-dealing. You can use this card to nominate all other cards with the same rank as bust cards. Another key point is that it is obligatory for the players holding a bust card to fold. This one resembles Stud Poker, and hence the name. Players receive a combination of face-up (street) and face-down (hole) cards. Players receive an incomplete hand of face-down cards. The dealing of the face-up community cards happens at the center of the Teen Patti table. One or more players use these cards to complete their three-card hands. This one is an inspiration of Texas Hold’em Poker. Players receive a complete hand either before or after betting. They can then discard unwanted cards and restructure their hand by asking the dealer to deal with new cards. They can do so by ‘purchasing’ the new cards and placing the amount into the pot. The dealer deals with a single card for each player. The game requires you to place a prefixed amount into the pot. All players pick their card without seeing it and place it on their forehand. Therefore, every player can see everyone else’s cards but his own. The playing of Cobra generally occurs as the last hand in a game of Teen Patti. 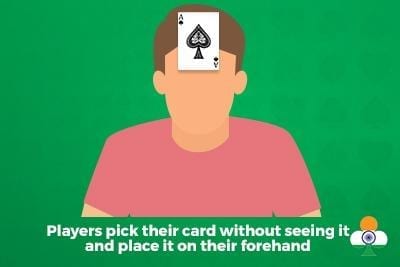 The dealer deals 3 or 4 cards for each player. Any K or J with only a side profile and an eye visible is a wild here (example – king of diamonds and jack of spades). Kaana gaming happens when a player receives a trio and continues up until someone asks for a show to the one holding the K or J. We’ve discussed this earlier. Sometimes the division of the Teen Patti pot happens between the player with the best high hand and the player with the lowest hand. This is known as High Low Split. This usually plays out in two forms – ‘declaration’ and ‘cards speak.’ In a declaration, players verbally declare if they wish to go for the high or low hand. The highest and the lowest ranking hands win 50% of the pot each.

On the other hand, in cards speak, all the players show their cards, and everyone analyzes their hands. As a rule, the highest and the lowest ranking hands win 50% of the pot each. In case there’s a tie for the high or low, the pot can further be split. For instance, if a player has the highest win, but the lowest is a tie between two players, the splitting of the pot happens as follows: 50% for the highest hand, 25% for the first lowest hand, and 25% for the second lowest hand. In this Teen Patti variation, the dealer distributes 3 cards to each player and collects the boot value. He then places 3 Joker cards on the table. Every time a player folds, the dealer changes the Joker cards with 3 new Joker cards. This continues until there are only two players remaining, or the maximum pot value reaching happens. Other rules are similar to regular Teen Patti.

There is dealing of five cards  for each player where three virtual wild cards are possible:

The virtual wild cards come in usage only once in each hand.

The wild ones are A, K, 4, and 7 of all suits and colors. The player with the most substantial hand wins. 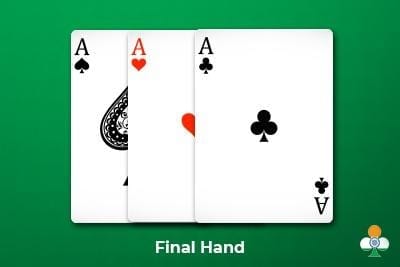 The starting boot here is 4x the normal boot. All other rules are the same in this teen patti variation.

In this variation of Teen Patti variation, the hand closest to 9-9-9 of any suit wins. The gaming with this version happens with a 20-cards deck containing A-K-Q-J-T. It can have a max of 6 players. Although this is only a small list, there is a lot going on. The variations are endless, and you have to be a pro-Teen Patti player to be brave enough and try them all.  Also, don’t forget to check out our guide to playing online Teen Patti, where we discuss the basic rules. If you are looking for Teen Patti casinos, below is a list of the best sites.

BEST SLOTS WITH THE HIGHEST RTP

Casino card games offer an amazing mix of thrilling gameplay. And they come with the potential for big wins, as many of them have very high RTPs. Games like Blackjack, Baccarat, and Video Poker are among the most popular and th...

BEST SLOTS WITH THE HIGHEST RTP

Every gambler looks for the best odds in any game they intend to play. Online slot games aren’t any different. In this guide, we’ll take a look at the best Read more Mar 07, 2020

You’re a sports lover, huh? Well, thank God because there’s a ton of sports-themed slot games available for you. It’s time to explore a different world of slot games.